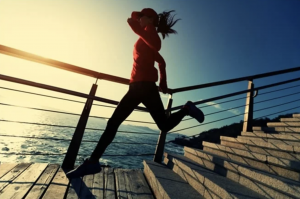 According to scientific literature, exercising in the morning is more beneficial than exercising at night. The better outcome is associated with improved management of metabolic pathways and energy homeostasis.

Why is the timing of exercise important?

Food intake, energy metabolism, and systemic energy expenditure collectively play an important role in maintaining energy homeostasis and preventing various metabolic disorders. Since circadian rhythm (24-hour day-light cycle) is a key regulator of energy metabolism, performing exercise in synchronization with circadian rhythm can be an effective way to maximize the health benefits of exercise, as well as to maintain an adequate energy level.

In general, there is a widespread belief that the best time of exercise is early morning. Studies have found that aerobic exercise performed in the morning causes a significantly higher reduction in nocturnal systolic blood pressure as compared to exercise conducted in the afternoon or evening. A morning exercise is also associated with a higher duration of deep sleep at night time.

Regarding the risk of exercise-induced hypoglycemia in diabetic patients, it has been found that exercise in the morning causes significantly lower rate of hypoglycemia and improved metabolic control as compared to the afternoon exercise.

Moreover, morning exercise has been found to cause beneficial changes in skeletal muscle metabolism. These changes include increased activation of the glycolytic pathways, higher utilization of carbohydrates, higher utilization of alternative energy sources, increased breakdown of fats and amino acids, and adaptation to systemic energy expenditure. The increased rate of glycolysis and resulting depletion in carbohydrate sources occurs due to exercise-induced activation of hypoxia-inducible factor 1α (HIF 1α). Taken together, it can be said that the time of exercise serves a vital role in maximizing the metabolic benefits of exercise.